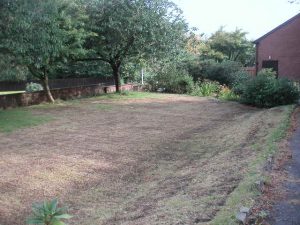 Scarifying the lawn before the border planting

The front lawn facing Bank Lane is the largest lawn at the Vicarage. It is also very long and so ideal for children’s games. Anne wanted both this and the side lawn to be set aside to be used by the Church Hall, especially so the church youth groups could use it in the summer months. However, there remained a problem of security at the front. People regularly jumped over the wall into the garden from Bank Lane. 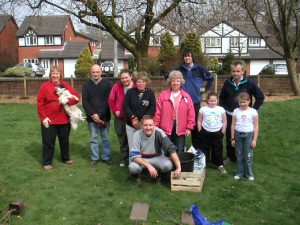 After a potentially dangerous incident, Anne convinced the Diocese that a security border of shrubs set among the three cherry trees was essential. David came up with the concept, having designed similar schemes for schools while Anne turned to a professional horticulturalist to design the scheme. Janet Copeland is based in Belmont and her design involved dividing the long lawn into two large circles with the security planting following the curve of the circles. This idea gave shape to the lawn and created two recessed borders where she specified a series of shrubs that could tolerate shade while also being good for wildlife. 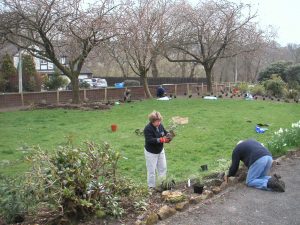 Anne made a deal with the Diocese where it paid for the plants and soil while Anne paid for the design and the church did the actual planting. In early 2006, Janet’s plan was marked out on the ground, the turf was lifted and new soil brought in. Then a volunteer group of church members had a great time planting up the new border.

Nobody knew at the time but the the soil came full of the seeds of wild flowers. These grew up among the shrubs leading to much better mix of woodland plants than the garden had ever had. Not all the planting survived two hard winters when Anne has had to bring in replacement shrubs but the scheme was nevertheless great success. 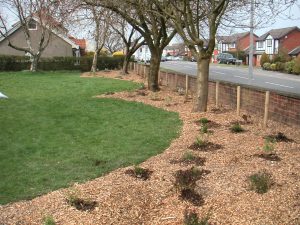 The plan involved providing a path from the church hall rear doors to take people to the front and side lawns. However, the route was blocked by a large hump of rubble filled ground. David set-to with spade and shovel to reshape it into a path and embankment. Anne commissioned Janet a second time to design planting for the borders of the route which ran up to the side lawn and down to the front lawn. 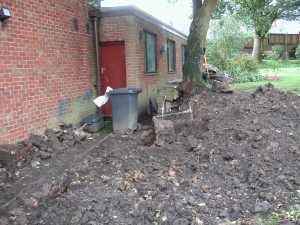 As part of this second scheme, Anne and David restored the original Rhododendron border either side of the drive. Only five shrubs had survived but by pinning their lower branches to the ground, a technique known as layering, another ten shrubs were created to plant up both sides of the drive. 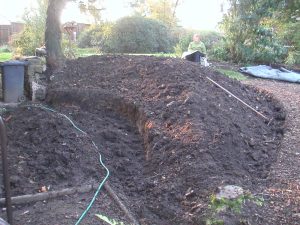 To get a good effect quickly, two rows were planted on the slope on the right hand side of the drive. The plan is now to cut back the front row and to dig the row out for transplanting elsewhere, allowing the back row to take over on its own. By layering the existing plants, the Rhododendrons all flower at the same time making a wonderful display in spring. 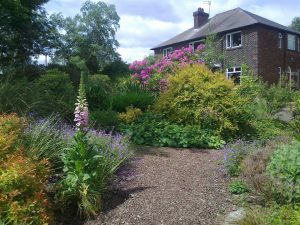 The Vicarage garden lies at the edge of the wood which runs up the Knuzden Brook and it was felt that it should be planted as a woodland garden, to act like like a clearing or woodland edge for birds and other wildlife. So to complete the new scheme a series of trees were planted along the line of the drive from the front gate.

Next to the gate is an Ash, then halfway up the drive are three Birch and a Mountain Ash creating a sense of enclosure on the drive and the front lawn. At the top of the drive Birch, Hawthorn, Mountain Ash and Alder have been planted. On the new path to the church hall, another Alder, a Cherry and some black Elders were also planted. As they have grown, the trees have encouraged large numbers birds to frequent the garden. There is hardly a woodland species that hasn’t visited at some time. There are several fruiting trees in the garden which provide food for the birds throughout the year. 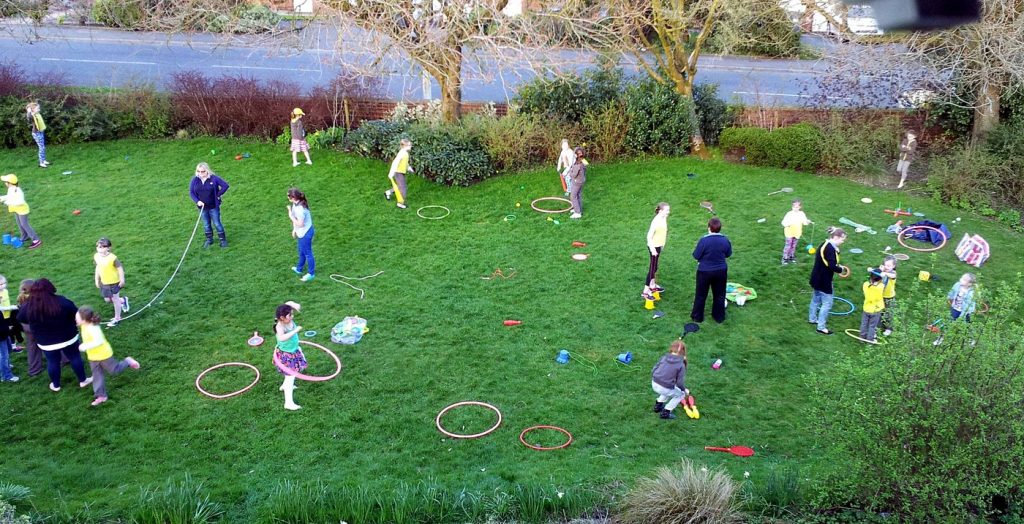 The front lawn in use in 2015 with the planting beginning to take effect. 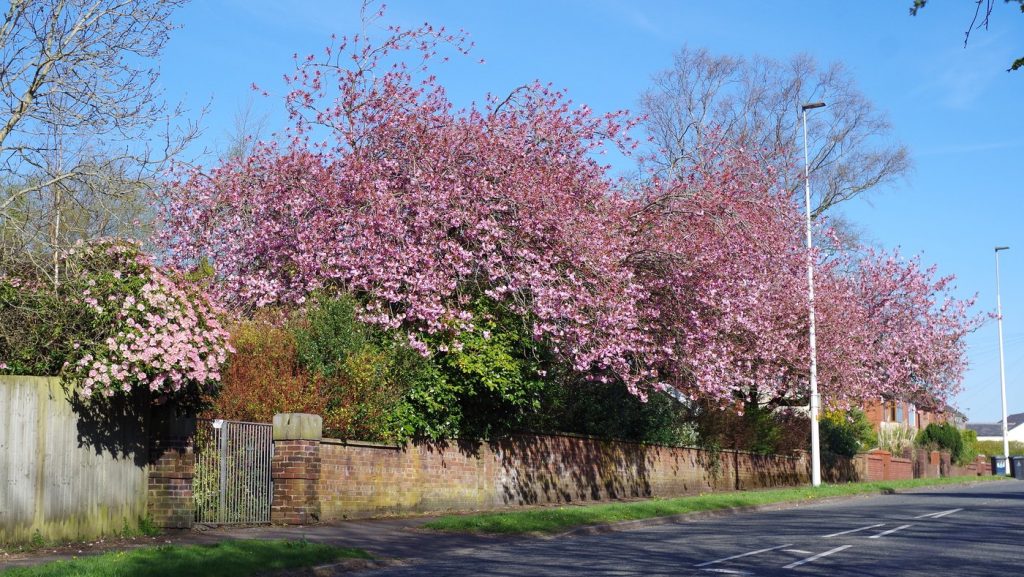 In 2020, the border provides privacy and protection while complementing the Japanese Cherry trees 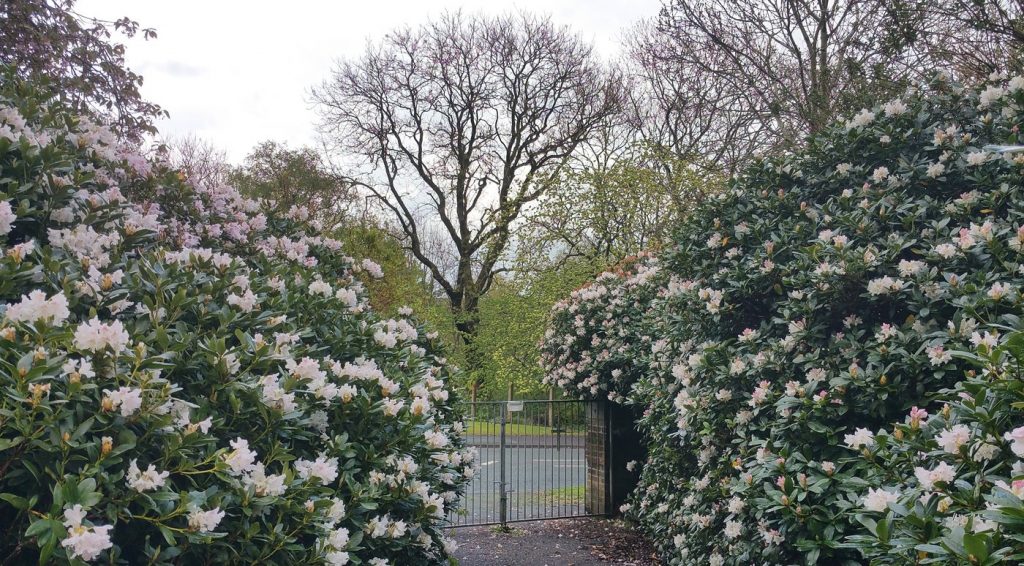