King Oswald from a 13th-century manuscript

Lord God almighty,
who so kindled the faith of King Oswald with your Spirit
that he set up the sign of the Cross in his kingdom
and turned his people to the light of Christ:
grant that we, being fired by the same Spirit,
may always bear our cross before the world
and be found faithful servants of the gospel.
Amen

Today is the feast of St. Oswald, the saint to which our church is dedicated. Here is his story.

Oswald’s father, King Aethelfrith (d. 616), was king of ancient Northumbria which was made up of two united kingdoms, Bernicia, roughly Northumberland, Durham, Berwickshire and East Lothian, and Deira, which is now Yorkshire. Oswald was born in 604. Shortly afterwards his uncle Edwin killed his father, King Aethelfrith,  and the 12-year old Oswald with his brothers and sister fled north to live at Saint Columba’s monastery on the island of Iona. There, he converted to Christianity and was raised by the monks.

In 633 Edwin died and Oswald returned to Northumbria as the new king. At that time, Britain was comprised of many warring kingdoms and Cadwalla, the Welsh king of Gwynedd, had invaded Deira and put it to waste. Oswald had to defend his new kingdom and went to meet the invader near Hadrian’s Wall at Hexam The night before the battle, Oswald had a vision of Saint Columba in which the saint foretold that he would be victorious. Oswald then raised a cross and prayed for victory alongside his troops. Oswald was successful and the battle became known as the Battle of Heavenfield. King Oswald then reunited the two parts of his kingdom and invited Saint Aidan to come from Iona to establish Christianity in the kingdom. 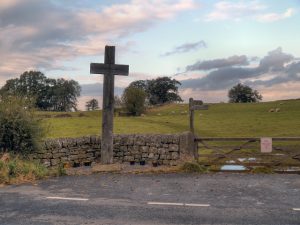 Site of the Battle of Heavenfield

A monastery was founded in Lindisfarne, so that it became known as Holy Island. It was the base for joint missionary journeys of Oswald and Aidan throughout the kingdom. Oswald acted as Aidan’s interpreter when he was preaching, since Aidan did not know English well. Churches were built across the north, including a church which later became York Minster. Mission cells spread the Celtic Christianity of St. Columba so that  Northumbria was transformed. Villagers gathered to hear the word of God and were converted, young people were educated in monasteries, poor people were cared for and sick people were healed.

On one occasion, at Easter, Oswald was sitting at dinner with Aidan, and had a silver dish full of fine food, when a servant, whom Oswald had appointed to care for the poor, came in and told Oswald that a crowd of poor people were in the streets begging alms from the king. Oswald then immediately had his food given to the poor and even had the dish broken up and distributed. Aidan was greatly impressed and seized Oswald’s right hand, saying, “May this hand never perish.”

Throughout his eight-year rule Oswald established law and order, and fought physically and spiritually to benefit his people. He became the overlord of the whole of England and was seen as a saintly king.

King Oswald was killed by the forces of King Penda of Mercia at the Battle of Maserfield, in Oswestry, Shropshire in 642. It is recorded that he ended his life in prayer as he prayed for the souls of his soldiers when he saw that he was about to die. His dismembered body was placed on stake but later, King Oswald’s followers recovered his head and his brother, Oswy, sent it to Lindisfarne where it became an object of veneration. 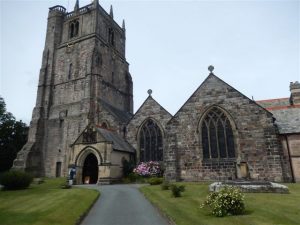 Prior to this, on the journey down to Oswestry, King Oswald camped at what became Oswaldtwistle. Church Kirk may mark the site of the encampment suggesting that the church was already established at this time, possibly by King Oswald himself. There was a shrine at the church to Saint Oswald which is recorded as being destroyed in the Reformation by a zealous local land owner. A holy well near the church was also unfortunately lost due to changes to the church yard during the nineteenth century.

After his death, Oswald soon came to be regarded as a saint and was canonized in 692, his feast being kept on 5th August.  The spot where he died came to be associated with miracles, and people took dirt from the site, which led to a hole being dug as deep as a man’s height. Another story says that his right arm was taken by a raven to an ash tree, which gave the tree ageless vigor; when the bird dropped the arm onto the ground, a spring emerged from the ground. Both the tree and the spring were subsequently associated with healing miracles and the name Oswestry comes from Oswald’s Tree.. 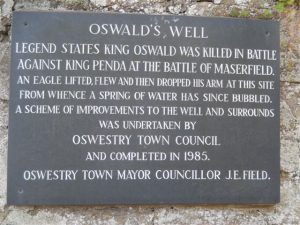 During the Viking raids in 875 the monks fled from the monastery at Lindisfarne and carried their relics with them, including the head of St. Oswald, through many flights and wanderings over many decades. Eventually, after nearly 200 years St Oswald’s head was interred in Durham Cathedral along with the body of Saint Cuthbert where it remains today.

As well as being a popular English saint, Saint Oswald is also remembered in some churches in Austria and Germany.