Today is Saint Etheldreda’s day. St. Etheldreda, Æthelthryth or Audrey was Queen of Northumbria. She was born around 630 and was part of the generation which followed Saint Oswald. She was born just before he died at the battle of Maserfield. 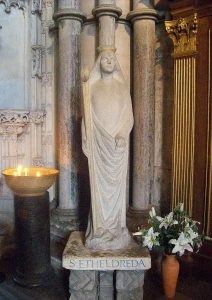 Etheldreda wanted to become a nun but, as was often the case for daughters of nobles,  she was given in marriage by her father, Anna, King of East Anglia while still very young. The marraige was to a subordinate prince, Tondberht, ealdorman of the South Gyrwas. He gave her a piece of land known as the Isle of Ely. By special arrangement, she remained a virgin throughout her marriage. On Tondberht’s death around 655, Etheldreda retired to the Isle of Ely, her dowry.

St. Etheldreda was forced to marry a second time out political convenience. This time it was to Egfrith, the young king of Northumbria, and a successor of King Oswald. He was one of the most powerful kings of his time.

Throughout the 12 years of here second marriage, she gave much of her time to devotion and charity and, like the nun she aspired to be, she remained a virgin. St. Wilfrid was her friend and spiritual guide. He helped to persuade her husband that St. Etheldreda should live for some time as a sister of the Coldingham nunnery, founded by her aunt, St. Ebb, in what is now the Scottish Borders. During this time, St. Etheldreda only ate once a day and wore clothes made only of wool. After midnight prayers, she would go back to the church and continue praying until morning. 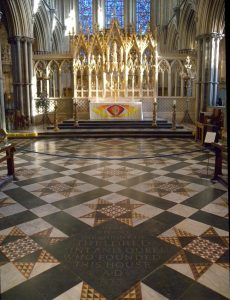 She returned to Ely in 673 where she founded a religious community and built a magnificent church which eventually became Ely Cathedral, of which she is the patron saint today. If you go to Ely Cathedral, there is an inscription on the floor marking the location of her shrine, –

HERE STOOD THE SHRINE OF ETHELDREDA, SAINT AND QUEEN, WHO FOUNDED THIS HOUSE AD 673

Etheldreda set free all the bondsmen on her lands and for seven years led a life of austerity taking pain and humiliation as a blessing. She died on June 23, 679 of an illness that had painfully swollen her neck, most likely the plague which killed several others at the monastery. She reputedly saw the swelling of her neck as a divine punishment for her vanity in wearing necklaces in her younger days.

After her death, devotion to her spread rapidly, as people received help and favours through what they were convinced was her powerful intercession in Heaven. At St Audrey’s Fair necklaces of silk and lace were sold, often of very inferior quality, hence the derivation of the word ‘tawdry’ from St Audrey.