Today, 11th July, many Christians remember Saint Benedict of Nursia, Abbot of Monte Cassino, who is known as the Father of Western Monasticism. It is a extra special feast day for those nuns, monks and lay people who seek to follow the Rule of St. Benedict.

Saint Benedict was born in Nursia, central Italy, in the year 480, or thereabouts. Initially, he studied at Rome but the shocking corruption he found there caused him to become a hermit at a place called Subiaco in the provinces. He soon attracted disciples and began to set up small monasteries in the area, including the Abbey of St. Scolastica, built by St Benedict around 520. A little while later, a faction tried to poison him, so he left for Monte Cassino with a group of loyal monks, where he later wrote his famous ‘Rule’. The Rule of Saint Benedict was to help fallible monks striving to live out the Gospel in their communities. Benedict died at Monte Cassino around 550 AD. 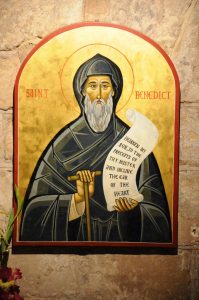 Saint Benedict never intended to found an ‘order’ but his rule was so good that it was disseminated and widely followed, becoming the model on which western monasticism was based. It spread right across the western world and over 700 years later, it was still being followed in the Lancashire Cistercian monasteries of Whalley Abbey and Salley Abbey and the local Monastic Grange at Accrington on Black Abbey Street.

Benedictine monks and nuns are still with us today, such as at Stanbrook Abbey at Wass near York. Each day, along with prayers and readings, a Benedictine community will read out a section of the Saint Benedict’s rule for reflection.

Saint Benedict is recalled in gardens by Herb Bennet, a wild flower that loves shady borders. It is so succesful, it can become something of a weed!

The header image shows Saint Benedict delivering his rule to the monks of his abbey.

A prayer by Saint Benedict

O gracious and holy Father,
give us wisdom to perceive you,
diligence to seek you,
patience to wait for you,
eyes to behold you,
a heart to meditate upon you,
and a life to proclaim you,
through the power of the Spirit
of Jesus Christ our Lord.

Collect
Eternal God,
who made Benedict a wise master in the school of your service
and a guide to many called into community to follow the rule of Christ:
grant that we may put your love before all else
and seek with joy the way of your commandments;
through Jesus Christ our Lord.